When Your Yellow Brick Road Hits a Red Brick Wall

I’ve loved seeing the progress of the demolition over the last few weeks. There wasn’t a ton that was in the way of picturing the final vision of each room, but when some walls came down it helped visualize the new space. Earlier in the week, the GC let me know that most of the big demolition was done – what was left depended on our final plans with the architect and that’s about a week or two away. So, armed with a camera and full of excitement, we went to the house this weekend to take it all in. I was looking forward to the demolition of the staircase from the first floor to the second floor as that would open up the connection from the living room to the kitchen.

The stairs are planned to move into the dining room – who really needs a dining room that’s 17’ x 15’? That would leave an ample dining room and would create a corridor with coat closet, access to basement and powder room before walking into the kitchen. There’s a ceiling height change and with some interesting entrance design that would push you into the kitchen. Here’s a quick before and after of the plans… followed by the conundrum.

This is the current floor plan. You can see that the L-shaped kitchen and breakfast area (and bathroom above) were were added onto the house at a later date (hence the shorter ceiling). The stairs made sense when the house was first constructed over 100 years ago. But once the addition was built, the stairs were a weird occlusion.

In the new plans, the stairs will move and a coat closet and powder room will be added. This will open up the kitchen and will allow a connected eating area.

But here’s what we saw when we walked into the house this weekend. A red brick wall. Smack in the middle of the proposed new walkway. This red brick wall is an old exterior wall supporting the house – a load-bearing wall. Uh-oh. That sounds expensive. We sat there staring at the space with 2 friends to envision alternate layouts where the wall wouldn’t need to move, but be exposed and celebrated. We measured, we envisioned, we speculated. I sent a text to the GC. And then we decided that it was something best left to the professionals. Moving load-bearing walls isn’t impossible, it just requires structural beams to support the load above and that just sounds more expensive – but in this case, it’s something necessary. Off to RESTORE for shopping inspiration. If you live in the Philly area, check it out. 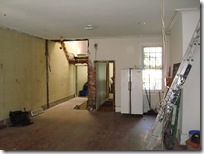 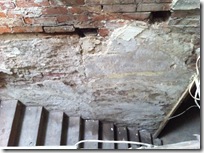 More pics of the first floor – no staircase up means no pics of the second and third floor. I’m sure my GC is happy that I didn’t have another reason to bother him on a weekend. Pretty cool wallpaper find under all that drywall.

This entry was posted in "Before", Demolition, Floor Layout, General Contractor, Pictures. Bookmark the permalink.